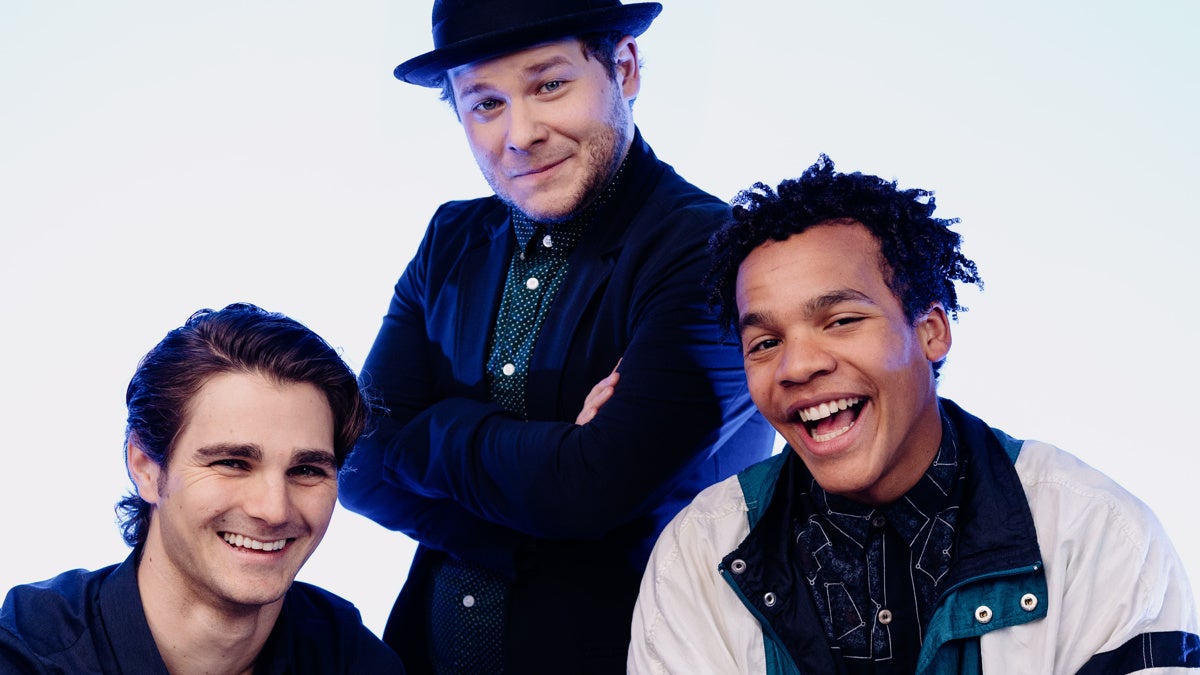 If hygge means you’re friendly then Austin Colby, F. Michael Haynie and Mason Reeves must be drinking hygge gloog for breakfast! It’s true, the three talented performers, who are playing Hans, Olaf and Kristoff, respectively, in the North American tour of Disney’s Frozen represent all of the warm, compassionate and happy attitudes represented in hygge. The Frozen tour, which will officially open at L.A.’s Hollywood Pantages Theatre in December, plans to bring those positive life lessons and all of the renowned spectacle of a Disney musical to cities all across the U.S. and Canada.

Caroline Bowman and Caroline Innerbichler are leading the Frozen tour as the Arendelle princesses Elsa and Anna, and they couldn’t ask for a better trio of supporters than Colby (who’s married to Bowman!), Haynie and Reeves. Colby has been seen in Jersey Boys, The Sound of Music and West Side Story; Haynie’s Broadway credits include Wicked, Charlie and the Chocolate Factory and Holler If Ya Hear Me; and Reeves’ musical credits include Footloose, Mamma Mia! and Guys and Dolls. When asked what about this new adventure excites them the most, all three declare that it’s working with Bowman and Innerbichler and the show’s universal message of love and acceptance.

Now is your chance to get to know so much more about Colby, Haynie and Reeves before you see them bring these treasured characters to life when Disney’s Frozen tour comes to a city near you. Check out Broadway.com photographer Emilio Madrid’s cool portraits of the guys below and find out what they love most about playing Hans, Olaf and Kristoff, why they find Frozen to be especially magical, and how they bring hygge into their own lives. Read on and enjoy!

What’s your first major “Disney memory” and what kind of an impact did that experience have on you?
I remember my grandfather taking me to see Aladdin in theaters and I was instantly amazed by how the characters felt like they were coming to life off the screen. I was an instant Disney fan and I was convinced that I would be a Disney animator one day. It’s neat to see how life has brought me to this place, bringing a Disney character to life in a different way. Young me would geek out if he knew my job was portraying a Disney character.

What do you love most about playing this character?
Hans has secrets that some viewers know about and others don’t. It’s so much fun to be a part of revealing the surprise every performance.

What’s a genuine lesson the story of Frozen has taught you?
That love is more powerful than self-doubt or fear. Our individual gifts are so unique and, when used for good, can make this world a better place.

What’s your favorite song from Frozen and why?
“Let It Go!” Not only is it our show’s anthem, sharing the message of releasing fear and self-doubt, as well as spreading love, but you have never heard the way Caroline Bowman sings it. It is thrilling to witness.

Describe how you bring hygge into your daily life?
My wife and my dog, Kodak, give me all the hygge I need. I don’t need much in life and they are my source of daily joy.

What’s your favorite song from Frozen and why?
When you hear Mason Reeves sing “Kristoff’s Lullaby,” you’ll know.

What do you love most about playing this character?
It’s a big responsibility to portray a character that has such a daunting lineage: Josh Gad, Greg Hildreth and Ryann Redmond! I love getting to be the next in line to carry this “Snowy baton.”

What’s a genuine lesson the story of Frozen has taught you?
Olaf leads every moment of his life with love. It’s scary, but it is so rewarding.

If you had been born with a special power what would you have liked it to be and why?
I’m a superhero nerd, so I’ve thought long and hard about it: wingless flight. The Magic Carpet from Aladdin gets it.

What’s your first major “Disney memory” and what kind of an impact did that experience have on you?
I was young when I got to experience what I’ll always remember as the “Big 4”: The Little Mermaid, Beauty and the Beast, Aladdin and The Lion King. When I saw them in theaters, I knew they were special, but I didn’t know that that same four would also galvanize Disney’s mark on Broadway. Frozen has added to both of those legacies in an exciting new way, and I’m honored to be a part of that.

Would you consider yourself a bit of a fixer-upper? If so, how?
I’m an actor. We’re all fixer-uppers!

Describe how you bring hygge into your daily life?
By meditating every morning, drinking tons of tea and by being very grateful for the awesome friends and loved ones that I have around me. It keeps me grounded, content and peaceful. Also, I love a good trip to the sauna.

What’s your first major “Disney memory” and what kind of an impact did that experience have on you?
The movie Hercules and, more specifically, the song, “Go the Distance.” It was the first song that I ever used for a serious, real-life theatrical audition for a production of Beauty and the Beast at a local youth theater. The song is one of complete hope and determination, and at the time it meant so much to me because its message resonated deeply with my own passion to succeed and make something of myself in life, even though I was only 11. I was determined to find the place where I “belonged,” just like Hercules.

What’s your favorite song from Frozen and why?
“In Summer,” especially when it’s performed by our lovely Olaf, F. Michael Haynie. As for why it’s my favorite, what could possibly be funnier than the morbid humor of a snowman that dreams to see summer? Also, F. Michael is comedic gold and puts the “man” in snowman, let me tell you.

How are your snowman-building skills? And what is the key to a perfect snowman?
I’m from Cave Creek, Arizona, which is in the middle of the Sonoran Desert, so I’d have to say my snowman building skills are far from perfect. For me, the closest I ever got to a snowman was putting some plastic snow on a cactus, so that’s something folks can try!

What do you love most about playing this character?
I love how much of an emotionally-complicated, rooted and comprehensive arc that I get to portray every night. At the beginning of the Frozen, Kristoff is this very isolated and guarded person with little-to-no human interaction and only one friend, his reindeer Sven. Over the course of the show, he learns what it’s like to let his guard down around another human and become friends with one, then what it feels like to love, and finally what it feels like to share that love and have someone love you in return.

How are you most like your character and how are you different?
I’m most like Kristoff in that I’m definitely a weirdo. Sometimes my interactions with other humans don’t go the best either, with plenty of terrible, poorly-delivered jokes, and especially because I also greatly enjoy speaking for inanimate objects and/or animals that cannot speak for themselves. I’m different in that I’m a lot more open about sharing my compassion for others and I’m a little more open to receiving generosity and kindness from others. Though, Kristoff is very loving once he gets there.

Visit BroadwayAcrossAmerica.com to find out when Disney’s Frozen tour is headed to your city.